Rugby is the ultimate team sport. It requires discipline, strength, stamina and a total trust in ones team mates. From short to tall, from slim to stout, there is a place for everyone in a rugby team.

Very few players rise to individual fame and those that do always praise their team mates for their success. The most famous English player, Johnny Wilkinson, who scored the winning drop goal in the 2003 World Cup Final and is recognised for his fearless tackling, states his biggest fear is letting down his team.

There is no place for acting and crying ‘foul ref’ every time someone breathes on you. Rugby players tend to hide injury to show no sign of weakness. World-wide as a spectator-sport it is second in popularity only to football. However, as a player-sport it is the most popular and in fact in the Southern Hemisphere it is far more popular than any other sport, including football. Players who are not in the best football XI will find a welcome in the XV a side game. Small boys, and girls, can fit in perfectly as hooker or winger. Stocky individuals can show their value in the front row. Tall soles are a bonus in the second row and line outs. Hard and fast, but without footballing skills will earn you a vital position in the back row. Strong runners will enjoy playing in the backs.

Players must respect the referee and in fact only the Captain is allowed to speak to him, addressing him as ‘Sir’. Failure to adhere will earn your opposition a penalty and further dissent an extra 10 metres leading to a sending off. Disrespect is not tolerated.

Similarly, respect for the opposition is encouraged. During a game you may be fierce and full of controlled aggression towards your adversaries, but the moment the final whistle blows, players congratulate their opponents and each team will clap the other from the field. Afterwards a communal area sees good hearted banter together. Likewise, supporters appreciate good play from both sides and even in top international matches, there is no segregation of crowds, other than for logistical sale of ticket reasons. Players and supporters of both sides mingle on streets and in bars.

In joining a rugby club you will be joining the international rugby family. It is a character building game for boys and girls of all shapes and sizes. Touring is encouraged and life time friendships are formed. In embracing our sport you will begin a journey that will never stop. It is a journey you will not take alone ! 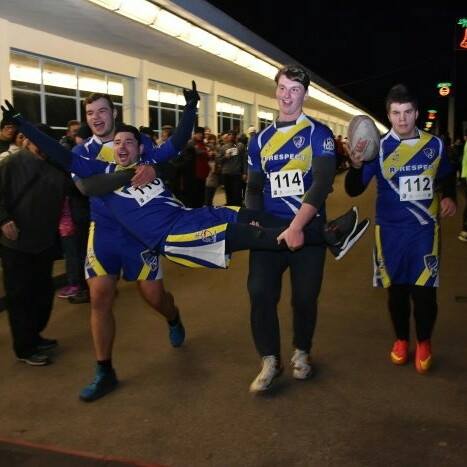