Rugby Suisse CEO Veronika Muehlhofer says there is more to the success of rugby in the country than a record World Rugby Men’s Ranking of 28th. 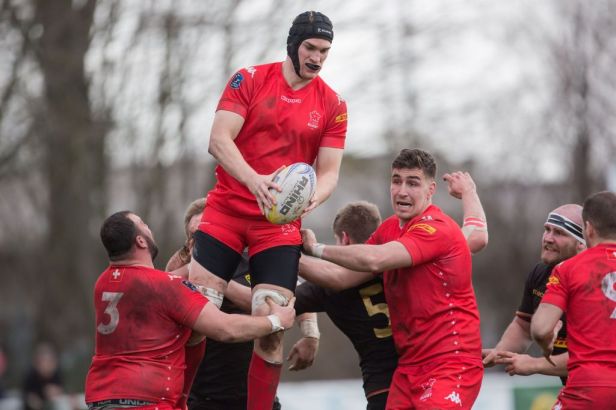 29 February is a day that stands apart in its own right, a once in every four-year event that only belongs to the calendar in a leap year. But for Rugby Suisse, the date in 2020 holds added significance – it was the day the senior national men’s team beat Germany for the first time and climbed to their highest-ever World Rugby Men’s Ranking of 28th.

For Rugby Suisse’s CEO Veronika Muehlhofer most pleasure came from not just the 33-20 victory but the make-up of the side on that famous day in Heidelberg.

Since assuming her present role full-time five years ago, Muehlhofer has worked tirelessly to put structures in place to make Swiss rugby build from a stronger base, creating a clear pathway for talented players to make it to the top.

To see four of the players – Nathan Pelsy, Axel Goudet, Liam Kavanagh and Erwan Meudic – who had come through the Swiss age-grade system from its inception celebrating on the pitch at the final whistle brought so much satisfaction to the former loose forward.

“Those players started at 16 and now they’re 21 and earning their first caps. They are the first generation of players to have come all the way through since the pathway was first created five years ago,” she said.

“There are others, too, for example, Jeremy To’a, who is currently injured.”

No boundaries to growth

The emergence of players like To’a, who has since gone on to play professionally with Oyonnax in France and semi-pro in England with Sale FC, is testament to Rugby Suisse’s work in growing the game geographically as well as numerically.

A powerful centre, To’a comes from a small town called Wurenlos in the Swiss-German region, near Zurich, an area that historically was not known for rugby.

“In Switzerland, the main rugby hub has traditionally been in the French-speaking area, the area to the west closest to France. Over the last four or five years though we have developed in the German-speaking parts, centred first around Zurich where there are a lot of ex-pats,” she explained.

“What is pleasing for us from a development perspective is there are now many more Swiss or Swiss-Germans without a French background or an ex-pat background who are really getting into playing rugby.

“The clubs and the Union are doing a lot more activities in schools – along the same principles of Get Into Rugby – but adapted to the needs of the Swiss schooling system because in Switzerland many sports teachers they might not even know what rugby is let alone coach it.

“So we started a big initiative a few years ago to teach PE teachers how to coach rugby and make it part of their school sports.”

Since Muehlhofer came on board, the number of rugby clubs in Switzerland has grown from 32 to around 42-43, while membership has doubled. Staffing levels at the Union have also increased as its reach spreads and, crucially, financial stability has been achieved.

While these developments are key to the sustainability of Swiss rugby, there is no getting away from the fact that the performance of the national team is the thing that makes the headlines.

“It (the ranking) is fantastic and we are happy with that but we wouldn’t be happy if we hadn’t achieved this on the back of building structures and sustainable programmes and a player pathway,” she said.

“Nobody within the union leadership ever wanted to just showcase 23 players in the national team that can win its way to the top, that’s not what we are interested in. Our mandate is to develop rugby and hopefully that will lead to on-field success.”

On Saturday, Switzerland will attempt to prevent the Netherlands from completing a clean sweep of victories in the Rugby Europe Trophy 2019-20, while also keeping their slim title hopes alive.

The Dutch hold a nine-point lead at the top of the table with the Swiss, in second, knowing that a surprise win would potentially give them a chance of claiming the silverware going into their final fixture against Ukraine on 2 May.

The game is being played in a suburb of Geneva, behind closed doors at the Centre Sportif des Cherpines.

“They are a top team and it’s certainly going to be a challenging game,” said Muehlhofer. “Their set-up is a couple of years ahead of ours and they have done some incredible work over the last four or five years to get to where they are.

“But they are not out of reach as you’d maybe look at the All Blacks, but they are a few paces ahead.”