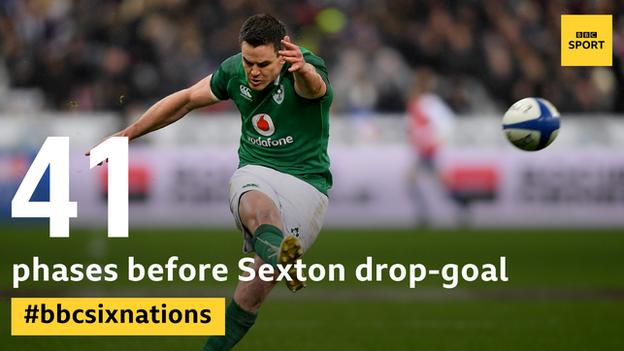 Ireland snatched a remarkable win over France thanks to a brilliant long-range drop-goal by fly-half Johnny Sexton.

After the Irish had led for most of the game in Paris, winger Teddy Thomas scored a fine 71st-minute try to give France the lead for the first time.

However, Sexton pulled off his dramatic drop in the 83rd minute to give Joe Schmidt’s side a valuable opening win.

Sexton landed four penalties before missing his fifth, which would have given the visitors 15-6 lead.

That failed attempt looked like proving costly when Racing 92 star Thomas scythed through the Irish defence for what seemed like being the decisive score.

Battle of the 10s

Perhaps it is unfair to compare an uncapped teenager with the British and Irish Lions starting fly-half, but the difference between the sides was crystallised by the fortunes of the two men wearing the number 10 shirts.

On his Test debut, Matthieu Jalibert lost an early aerial battle with Rob Kearney and minutes later he miscued an attempted chip over the Irish defence to cough up possession.

The Bordeaux youngster was too frequently guilty of crabbing across the field, which cut off space for his team-mates, before limping off after 30 minutes following an awkward collision with Bundee Aki.

In contrast, Sexton’s control of the Irish attack was flawless.

The Leinster man consistently probed at the French back three with an array of clever kicks.

And the playmaker showed nerves of steel to land the match-winning score at the death.

Thomas produced a real moment of magic to put France within seconds of a stunning win.

With less than 10 minutes left on the clock, the wing struck to put his side into the lead for the first time as Les Bleus appeared to have grabbed an unlikely victory.

Thomas gathered a clearing kick near the halfway line and sprinted past Kearney on the right wing before swerving in field, leaving Jacob Stockdale, Sexton and Keith Earls in his wake to score under the posts.

It was the first moment of real genius in the match before Sexton’s stunning winner.

When Brunel sits down to review the video of his first game as French national coach, he will see the cost of the indiscipline shown by his players.

France conceded 10 penalties in total, but all three of Sexton’s first-half penalties were relatively straightforward and the result of needless errors.

Sebastien Vahaamahina was guilty of four silly penalties either side of half-time – two of them were converted by Sexton for points and another cost his side a rare attacking position.

The home side fought their way back into contention in the third quarter but almost released the pressure valve when team captain Guilhem Guirado didn’t roll away, but Sexton missed his kick.

The home side improved their discipline in the closing stages but were left to rue their early mistakes.

The young French players will be devastated to have lost in such dramatic fashion, but they have shown that they can be contenders in this year’s championship and will have another week of training under Brunel before their visit to Scotland on 11 February.

Ireland’s Grand Slam remains on track – but only just. They will know they must improve their attack if they are to regain the title they last won in 2015. Joe Schmidt may now decide to use the same players again and resist the temptation to experiment against Italy in round two on 10 February.

What they said: ‘Our goals would have crumbled if we’d lost’

Ireland match-winning hero Johnny Sexton: “It was one of those moments – I’m just happy I got another chance as we have worked so hard over the last few weeks and all our goals would have crumbled today if we had lost.

“It’s great to be in the position we are now after getting an away win. I had a kick to put us two scores clear but I just snatched at it so I was happy to get another chance to secure victory for the boys.

“The boys’ legs were out and I don’t think we could have got through another couple of phases.

“The management drill into us every day that it’s never over and we have got some good characters in the team. We just wanted to get off to a good start.”